(See Appendix I at end of this piece – this write up is incomplete without it). 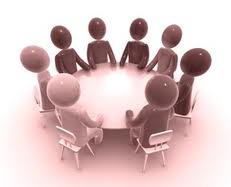 I have the rare honour of hosting His Excellency, Dr. Goodluck Jonathan, President of the federal republic of Nigeria, the President of Christian Association of Nigeria (CAN), Pastor Oritsejafor, and the editor Sun News Nigeria, Mr. Femi Adesina to a roundtable.

I will be very brief with my speech, to create adequate time for callers and other members of the public who have one or two questions for Mr. President and the other distinguished personalities on this round table.
As a young child, I recall the Sunday school lesson about King Solomon, how God appeared to him in a dream and asked him to make a request of whatever he wanted. As you know, Solomon requested for wisdom. Pastor, I hope I am correct? (Pastor oritsejafor nods in approval).

My first question goes to his Excellency; if you were Solomon, what will you ask for? By your body language sir and the inherent disposition of many African, Nigerian Leaders, Absolute Power, Wealth, Tenure Elongation, and defeat of opponent at the next polls are likely to top your list. Your response Sir…………… President now wearing “an unfriendly smile”.

Your Excellency, it is not a secret that many of our political leaders, top government functionaries belong to occult groups, is this in a bid to deliver the dividends of democracy? The scripture record accounts of untold hardships encountered by the Israelites as a result of ungodly leaders. Could this be the reason why we are not making meaning full headway as a nation?

Our house of assemblies is populated by Church, mosque goers (Christians, Muslims). Who then perpetuates the mass lootings? Pastor Oritsejafor you want to help Mr. President?

As CAN President (eyes fixed on Pastor Oritsejafor), you have made the headlines for condemning the despicable acts of the Boko Haram group against the Christian folks – as expected of any effective leader. Having said that, many Nigerians expect religious leaders to lead the fight against corruption, this assertion is substantiated by the fact that religious institutions have a role to play in National polity.

In response to her social science assignment, my little cousin, aged 10 years, had this to say about the role of religious institution in promoting National consciousness.

“These are organizations set up by people to teach belief and symbols of their religion. They bring social changes; they solve social problems, unite people, build good morals and also improve the quality of life in the country”.

“2015 election is near – assassination, evil plot, rigging is not an honourable way to win an election.”
My Next Question is for Mr. Femi Adesina Editor in Chief for Sun Newspaper, what do you think of the words in quote? Will it make any sense if a portion of the Sun’s front page conveys this information daily?

The horrible, terrifying front page headline that is synonymous with the Sun Newspaper and some other print media outfit gives me a lot of concern.

Mr. Editor should headlines like “30 PEOPLE ROASTED ALIVE, MAKE THE MAJOR HEADLINE ON A NATIONAL DAILY?

In developed countries, the media play a very vital role in the build up to elections, evaluating the credentials of likely contenders for top government positions. These evaluations on the past, childhood, family, educational background, job history etc of an aspiring political office holder helps to substantiate the credibility of such individual.

Lately, the Vanguard newspaper have been promoting, publishing provocative articles that can stir a verbal, physical religious upheaval amongst the Christians and Muslims. Here is an example

“Muslim clerics speak on return of Jesus?
JESUS IS COMING TO HAVE CHILDREN, HE WILL BE BURIED IN MEDINA; HE WILL RETURN AS LEADER OF THE MUSLIM NATIONS and many more @ http://www.vanguardngr.com/2014/01/muslim-clerics-speak-return-jesus/ – Post on facebook on the Jan 31, 2014.”

My last question goes to you, my reader, have you participated in any election? What excuse do you have for not participating in elections? I don’t care attitude? On religious ground?

Those who boycott elections on the ground of religious belief do themselves and the nation great harm. Jesus while on earth exercised his civil duties – paid tax. If you do not vote, then you have no right to complain about the excesses of government officials.

Come 2015 elections, stand to be counted.

The lines are now opened to the viewers, readers.
Hello, who is my first caller tonight? I will like to read your comments.

I sincerely thank Mr. President, Pastor Oritsejafor, Mr. Femi Adesina and You for honouring my invitation. Thank you.