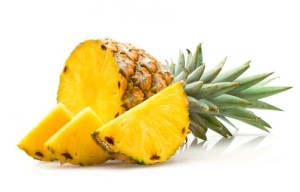 Spiny on the outside, sweet on the inside, pineapples are one fantastic fruit. Pineapples are members of the bromeliad family, and one of the few bromeliads to produce edible fruit, according to the biology department at Union County College.

The fruit is actually made of many individual berries that fuse together around a central core. Each pineapple scale is an individual berry. Pineapples’ nutritional benefits are as fascinating as their anatomy. “Pineapples contain high amounts of vitamin C and manganese,” said San Diego-based nutritionist Laura Flores.

These tropical treats are also a good way to get important dietary fiber and bromelain (an enzyme). “As well as having high amounts of manganese, which is important for antioxidant defenses, pineapples also contain high amounts of thiamin, a B vitamin that is involved in energy production,” Flores said. For all its sweetness, one cup of pineapple chunks contains only 82 calories. Pineapples are also fat-free, cholesterol-free and low in sodium. Not surprisingly, they do contain sugar, with 16 grams per cup.

Here are the nutrition facts for raw pineapple, according to the U.S. Food and Drug Administration, which regulates food labeling through the National Labeling and Education Act:

The nutritional profile for canned pineapple is different from raw pineapple. According to the U.S. Department of Agriculture, canned pineapple in light syrup has 131 calories per cup and 31.88 grams of sugar. It also contains fewer vitamins and minerals. If you do opt for canned pineapple, try to get it with no added sugar or look for a variety that is canned in fruit juice instead of syrup.

1. Immune system support Pineapple contains half of the daily-recommended value of vitamin C, according to the FDA. Vitamin C is a primary water-soluble antioxidant that fights cell damage, according to the Linus Pauling Institute at Oregon State University. This makes vitamin C a helpful fighter against problems such as heart disease and joint pain.

2. Bone strength Pineapple may help you keep standing tall and strong. The fruit contains nearly 75 percent of the daily-recommended value of the mineral manganese, which is essential in developing strong bones and connective tissue, according to the Linus Pauling Institute. One 1994 study suggested that manganese, along with other trace minerals, may be helpful in preventing osteoporosis in post-menopausal women.

3. Eye health Pineapples can help reduce the risk of macular degeneration, a disease that affects the eyes as people age, due in part to its high amount of vitamin C and the antioxidants it contains.

4. Digestion Like many other fruits and vegetables, pineapple contains dietary fiber, which is essential in keeping you regular and in keeping your intestines healthy, according to the Mayo Clinic. But unlike many other fruits and veggies, pineapple contains significant amounts of bromelain, an enzyme that breaks down protein, possibly helping digestion, according to the American Cancer Society.

5. Anti-Inflammatory benefits “Due to a complex mixture of substances that can be extracted from the core of the pineapple, well known as bromelain, pineapples can help reduce severe inflammation … and can reduce tumor growth,” Flores said. A variety of studies have indicated that bromelain may be helpful in treating osteoarthritis, though more research is needed. Excessive inflammation is often associated with cancer, and according to the Memorial Sloan Kettering Cancer Center, bromelain and other proteolytic enzymes have been shown to increase the survival rates of animals with various tumors. There is not yet, however, clinical evidence to show that such results will happen in humans.

6. Blood clot reduction Flores noted that because of their bromelain levels, pineapples can help reduce excessive coagulation of the blood. This makes pineapple a good snack for frequent fliers and others at risk for blood clots.

7. Common cold and sinus inflammation In addition to having lots of vitamin C, pineapple’s bromelain may help reduce mucus in the throat and nose, according to the University of Maryland Medical Center. So if your cold has you coughing, try some pineapple chunks. Those with allergies may want to consider incorporating pineapple into their diets more regularly to reduce sinus mucus long term.

“Because pineapple is a great meat tenderizer, eating too much can result in tenderness of the mouth, including the lips, tongue and cheeks,” Flores said. “But, [it] should resolve itself within a few hours.” If it does not, or if you experience a rash, hives or breathing difficulties, you should seek a medical help immediately. You could have a pineapple allergy. Flores pointed out a possible negative to pineapple’s high levels of vitamin C. “Because of the high amount of vitamin C that pineapples contain, consuming large quantities may induce diarrhea, nausea, vomiting, abdominal pain or heart burn,” she said.

Additionally, extremely high amounts of bromelain can cause skin rashes, vomiting, diarrhea, and excessive menstrual bleeding, according to the University of Maryland Medical Center. Bromelain can also interact with some medications. Those taking antibiotics, anticoagulants, blood thinners, anticonvulsants, barbiturates, benzodiazepines, insomnia drugs and tricyclic antidepressants should be careful not to eat too much pineapple. Eating unripe pineapple or drinking unripe pineapple juice is dangerous, reports the horticulture department at Purdue University. In this state, it is toxic to humans and can lead to severe diarrhea and vomiting. Eating a great deal of pineapple cores can also cause fiber balls to form in the digestive tract.

[notification type=”error”]Be smart! Use the subscription form on this page to subscribe to valuable contents from Knowbase. [/notification]