She was born in the village of Kwali in the Gwari region of Northern Nigeria, where pottery was a common occupation among women. She learned to make pottery as a child using the traditional method of coiling. She made large pots for use as water jars and cooking pots from coils of clay, beaten from the inside with a flat wooden paddle. They were decorated with incised geometric and stylised figurative patterns. Following the traditional African method, they were fired in a bonfire of dry vegetation

The Abuja Pottery Training Centre was established 1950 by an English potter, Michael Cardew, who was sent to the Abuja area by the then colonial government, ostensibly to improve the quality of local work.

Her pots were noted for their beauty of form and decoration. Several were acquired by the Emir of Abuja, in whose home they were seen by Michael Cardew in 1950. 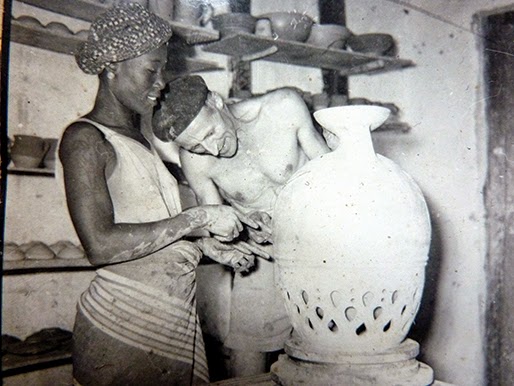 In 1954, she joined Cardew’s pottery training centre in Abuja, its only woman potter, where she learned to throw pots on the wheel. She made dishes, bowls and beakers withsgraffito decoration but also continued to produce pots using her traditional hand building and decorating techniques. Most of these were glazed and fired in a high-temperature kiln and therefore represent an interesting hybrid of traditional African with western studio pottery

Through Kwali’s contact with Cardew, she and her work became known in Europe, Britain and America. In the late 1950s and early 1960s, her work was shown to great acclaim in London at the Berkeley Galleries. She became Nigeria’s best-known potter, was awarded a doctorate and was made MBE in 1963. The Abuja Pottery was renamed the Ladi Kwali Pottery and a major street in Abuja is called Ladi Kwali Road. Her picture appears at the back of the Nigerian 20 Naira bill.